Blake G. Goldfarb is an experienced New York City Personal Injury Attorney, having litigated cases from their inception up through and including at trial, as well as on appeal. He has favorably resolved hundreds of cases for his injured clients and recovered millions of dollars on their behalf. He treats his clients like family and deeply cares about their cases. He is known as a tireless worker and always well prepared. He prides himself and takes great joy in not only meeting and but also far exceeding his clients’ expectations.

As a New York City Personal Injury Attorney Blake Goldfarb provides clients with candid legal advice, personal attention and passion and empathy for their struggle. He will do everything within the bounds of the law and ethics to help each of his clients achieve a just result.

While in law school, he was a Dean’s List student, received the faculty award in New York State legal practice and worked for over two years at a busy Manhattan personal injury law firm. Upon his graduation from law school, Blake joined the well known and regarded personal injury practice of Burns & Harris, where he has handled hundreds of personal injury cases throughout all five boroughs of New York City during the past six years.

Blake was born in Manhasset, New York. He currently resides in New York City and enjoys new restaurants and running in his free time, having recently completed the 2016 United Airlines New York City Half Marathon in March. 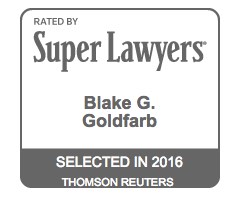