Blake G. Goldfarb has successfully briefed and/or argued more than 30 appeals for his injured clients before New York State’s highest Courts, including the New York State Court of Appeals and Appellate Divisions.

Some of his appellate victories have helped shape and create new laws for the benefit of personal injury victims.  For example, in Cividanes v. City of New York, 20 N.Y.3d 925 (2012), Blake helped convince the 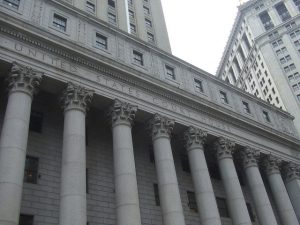 New York State Court of Appeals that an injured plaintiff need not suffer a “serious injury” in order to recover money damages for accidents where the motor vehicle in question was not the specific cause of the accident, but still seemingly related to the accident.

The decision limited a defendant’s ability to succeed on a “threshold” summary judgment motion and nullified older law which had prevented accident victims with non-serious injuries from receiving compensation for their injuries. Read the decision here.

Similarly, Blake helped author the injured plaintiff’s appellate brief in Oddo v. Queens Village Committee for Mental Health, 21 N.Y.S.3d 53 (1st Dept. 2015), a decision which extended a healthcare provider’s duty of care to the public at large and beyond that typically only owed to its patient.

The Court ruled that healthcare providers can be found liable to third-parties for the acts of their patients, thereby expanding the potential sphere of plaintiffs who can successfully sue for medical negligence. Read the story here.

Some of Blake’s appellate victories have resulted in substantial monetary recoveries for his clients. For example, in Cruz v. Bronx Lebanon Hosp. Ctr., 129 A.D.3d 631 (1st Dept. 2015), aff’d 2016 N.Y. LEXIS 385 (2016), Blake helped obtain the reinstatement of a Bronx jury’s $570,000 verdict, which had previously been reduced by the trial court to $200,000, in favor of his 65-year-old client, suffering from multiple chip fractures to her dominant elbow that had resulted in permanent pain and loss of motion.

The verdict currently stands as one of the highest sustained damages awards in New York State for an elbow injury treated without surgery. Read about the case here.

Prior results do not guarantee a similar outcome. Please be advised that the results achieved in a case depend upon the specific facts and circumstances of that case. Blake G. Goldfarb cannot guarantee a specific result in any legal matter. The testimonials or case results listed on this website do not constitute a guarantee, warranty or prediction of the outcome of any legal matter.