How to Appeal Your Injury Case

How to Appeal Your Injury Case

You may have the right to appeal your injury case if you have received an unfavorable decision from the Court or Judge. The rules applicable to the appeals process are very intricate, detailed and require your strict compliance. 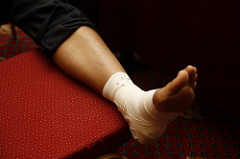 If you are unfamiliar with the rules, you should consult with an experienced NYC personal injury appeals attorney like Blake Goldfarb. Your failure to follow the rules could result in you losing your right to appeal.

Appeals from accident cases originating in the Civil Courts of the City of New York are heard and decided by the Appellate Terms of the Supreme Court. For more information about the Appellate Terms, commonly known as the “lower appellate courts,”.

Appeals of accident cases originating in the Supreme Court of the State of New York are heard and decided by the Appellate Divisions, commonly known as the “intermediate appellate courts.”

The appeals process in New York State Courts is usually started by the filing of a Notice of Appeal. You must serve and file your Notice of Appeal within 30 days after receiving the Court or Judge’s decision along with notice of its entry in the County Clerk’s Office.

How to “Perfect” Your Personal Injury Appeal

After timely filing a Notice of Appeal, you then have six months in the Second Department (Kings, Richmond, Nassau, Suffolk and Westchester Counties) and nine months in the First Department (Bronx and New York Counties) to “perfect your appeal” by serving and filing a proper Record on Appeal and Appellant’s Brief along with paying required fees to the appeals court. The six or nine month deadline to perfect your appeal is calculated from the date on your Notice of Appeal.

For the rules & procedures of the Appellate Division, First Department.

For the rules & procedures of the Appellate Division, Second Department.

Once all of the briefs and papers are served and filed, the appeals Court will either decide your appeal based on the briefs or schedule oral argument, where you will then be permitted to argue your position to a panel of appellate judges.

A typical panel in the intermediate appellate courts (known as the Appellate Division) is comprised of four or five judges, who will decide your appeal by a majority vote.

The panel will then issue a written decision on your appeal. Decisions reached by the appeals courts can be found on Law Reporting Bureau – New York Official Reports website.  The appeals court generally either “affirms” (agrees) with or “reverses” (disagrees) with the lower Court or judge’s decision.

The right to Appeal

However, under extremely limited and very specific circumstances, you may have the right to have your appeal heard for a second time by the New York State Court of Appeals, the highest appeals court in the State of New York. For example, the New York State Court of Appeals will hear a case where there is a double dissent in the Appellate Division and that dissenting opinion is in favor of the appellant on a pure question of law.

Visit the New York State Court of Appeals for the rules & procedures.

The rules applicable to your appeal are very specific, confusing and stringent.

Your failure to comply with the rules could result in losing your right to appeal.

Blake G. Goldfarb is an experienced personal-injury appeals lawyer, having handled many appeals before the Appellate Divisions and New York State Court of Appeals.

Blake is dedicated to helping his clients win reversal of decisions which adversely affect their legal rights.

Call Blake today toll-free at 1-844-672-5253 or e-mail him for a free case consultation and appeal your injury case today.

There is no fee unless we recover money for you.